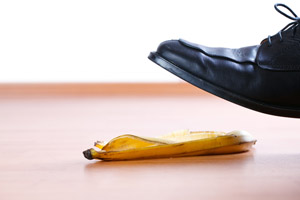 Under the law, negligence is inattention that causes a person harm.  Negligence can take two forms: action, such as a mason carelessly dropping a heavy brick off a scaffold: or failure to act, when a business owner disregards repairing a broken step in a stairway in a dimly lit corridor.

As directed, an auto-repair patron moved his car to a numbered parking spot.  As he left, a dealership employee driving another vehicle failed to see him and ran over his foot.  His crushed foot developed a complex injury, damaging the peroneal nerve and causing constant pain, color and temperature changes, and loss of hair on his foot.  A former highly paid stock broker, the injured man attempted to work for more than a year, but medications and burning pain forced him to stop.  He sued the dealership, alleging its employee negligently failed to keep a proper lookout.  The parties reached a significant settlement prior to trial.

If you or a loved one has been injured by a negligent party, you may be entitled to compensation for your injuries. Scott Mullins & Company works hard to get you all that you are entitled to under the law