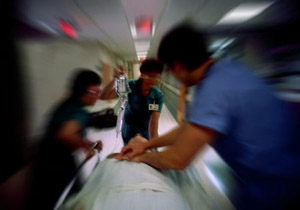 Most patients receive prompt and effective medical diagnoses and care in our nation’s emergency rooms; however, there are concerns.  The American College of Emergency Physicians report that treatment delays may occur because of…

A motorcyclist who was in a serious accident was airlifted to a medical center, where he began vomiting heavily.  He died in the emergency room after physicians delayed ordering nurses to drain several liters of fluid from his stomach.  A wrongful death attorney was able to demonstrate that the patient died because physicians failed to resolve a fatal stomach-fluid buildup in a timely manner.  A jury awarded the family a significant award for their loss.